WWE held it’s biggest event of the summer Summerslam live sunday night from the Barclays Center in Brooklyn, NY. For the first time the show was 4 hours long.  Here’s the results of the card: 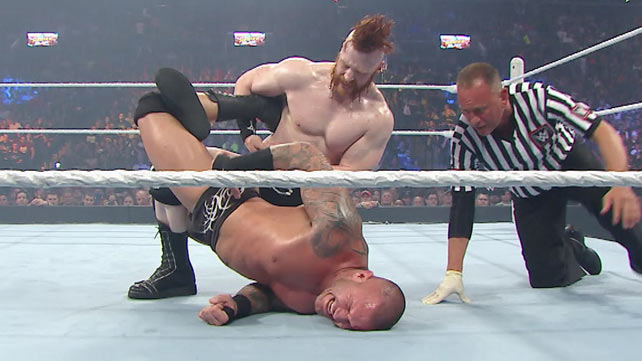 In the first match of the evening, Randy Orton battles Sheamus.  Both men wanted revenge on each other after they both cost the other the WWE World Heavyweight Title on RAW couple weeks ago­.  At the start, the crowd didn’t stop chanting “You look stupid” towards Sheamus wich prompt him to take the mic to address them.  Randy Orton took advantage from that point.  Orton tought in had the win after hitting an RKO but Sheamus wisely rolls out of the ring.  Sheamus gets the win after delivering not one but two Brogue Kicks on Orton. 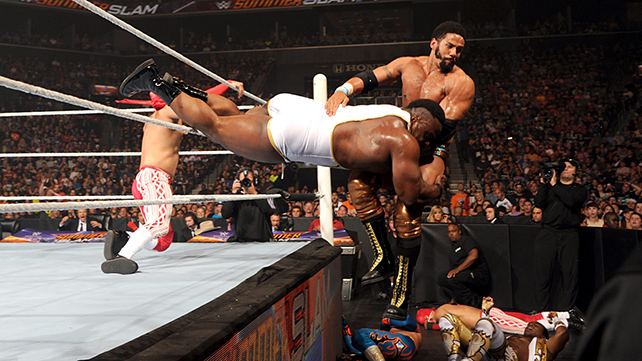 Up next it was the Fatal 4-Way for the WWE Tag Team Titles involving the champs the Prime Time Players, The New Day, Los Matadores and Lucha Dragons.  It was a pretty good contest with a lot of nice spots.  Kalisto stole the show at the beginning of the match.  The New Day dominated a part of the match with quick tags of Darren Young.  Things got hot when Titus O’Neil was tagged in and cleaned houses.  Big E deliver a big spear trought the ropes to Young.  Kofi Kingston tagged O’Neil when he deliver a big move on both Lucha Dragons and one of the Los Matadores.  After hitting Clash of the Titus Kingston and Big E dispose of O’Neil to make the pin and regain the championship.  The New Day celebrates like crazy in the ring…espacially Big E who was really into it.

Dolph Ziggler vs. Rusev ended in a Double Count-out 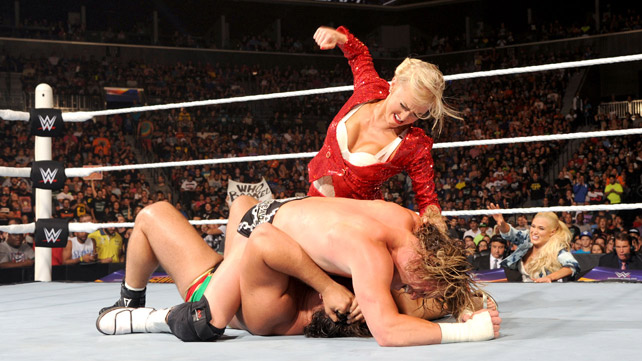 Dolph Ziggler made his return to the return after a month of absence.  Lana ditches her business suit for acid-washed denim tonight.  It was a back-and-forth match.  Towards the end Rusev had Ziggler in the Accolade when Lana pleaded for Ziggler not to give up.  Wich prompted Summer Rae to attempt to silence Lana with a slap wich she countered. The distraction casue Rusev to break the hold and confront Lana outside the ring when he receive a superkick onto the announce table.  Both men couldn’t make it back before the 10 count.  Result double count-out.  After the match the men brawled before the women got involved as well. 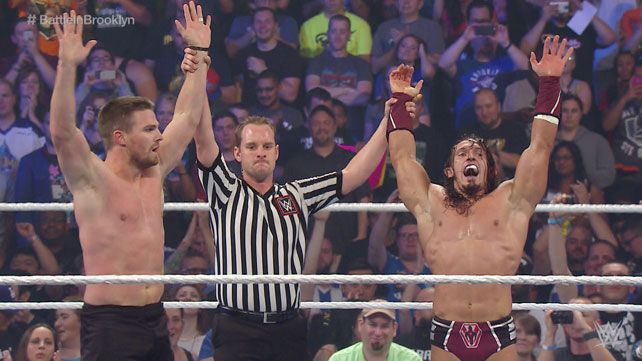 The star of Arrow Stephen Amell made is debut in wrestling tonight when he team with Neville to take on Stardust and King Barrett.  Amell work a good part of the match and show a lot of agility.  He even jump from the top rope to outside the ring on both of his opponents.  In the end, Neville hit the Red Arrow on King Barrett for the win. 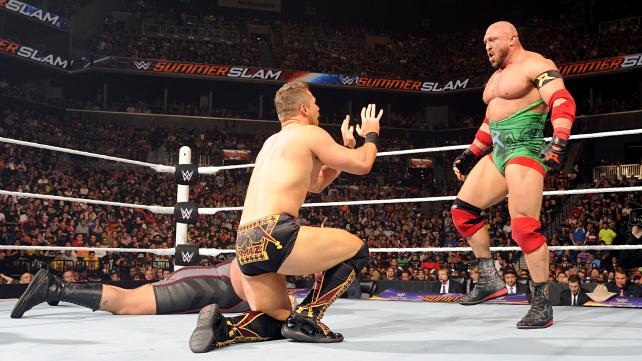 Ryback defended his intercontinental championship in a triple threat match against the Big Show and the Miz.  Not much to said about this match.  The end saw the Big Show hitting Miz with the KO Punch and Ryback seizing the moment to get the pin and retain his gold. 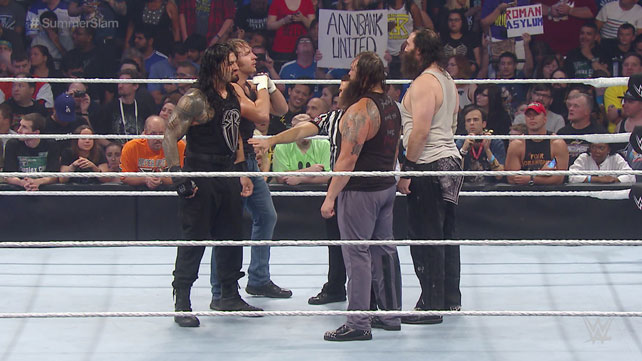 2/3 of the Shield vs 2/3 of the Wyatt Family is next.  The start of the match was crazy.  Both team brawl in a breakneck pace. After that, the Wyatt took advantage.  Ambrose hit Dirty Deeds on Wyatt follow by a spear by Reigns for the win. 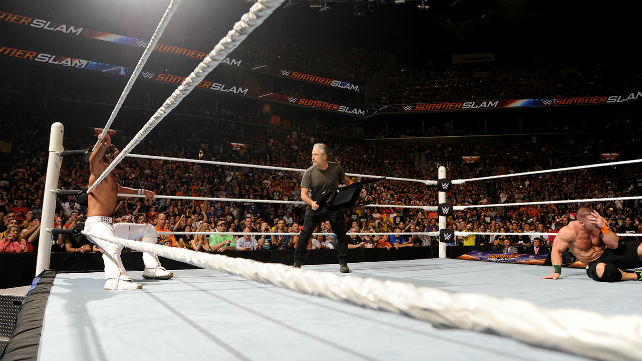 The champion vs champion winner takes all match is next.  Seth Rollins arrive to the ring in new white ring gear.  It was a great match.  Rollins show a lot of skills during this match to show why is the WWE champ.  Cena hit an AA on Rollins wich he kicked out.  Later on, Cena hit a seond AA on Rollins but took out the ref at the same time.  Then out of nowhere, Summerslam host Jon Stewart runs to the ring with a steel chair. He taunts Rollins but finally nails Cena in the stomach with the chair.  Rollins follow hitting the pedigree on that chair and scores the victory and becomes the new US Champion.  Seth Rollins celebrate with both titles to the pleasure of the crowd. 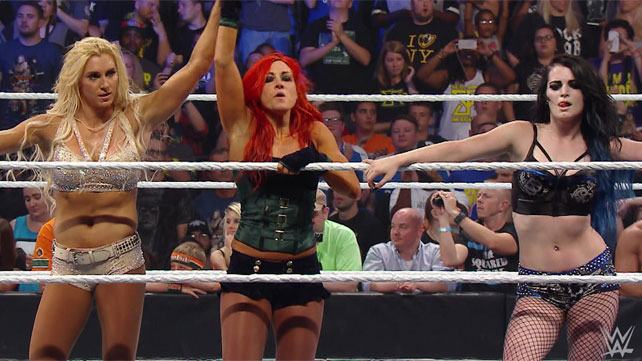 The diva revolution rolls on with a Three-Team Elimination Match.  There was a lot of jumping over the ropes at one point in the match where everyone was laid down. Team B.A.D. was the first to be eliminated by Team Bella when Brie pinned Tamina.  Team PCB got the win after Becky Lynch pins Brie Bella. 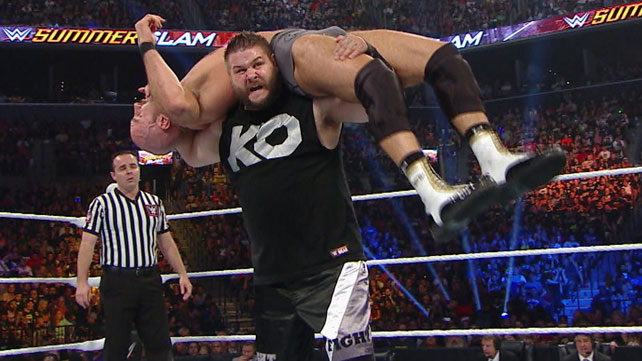 The match of the night contender was up next when Kevin Owens battles Cesaro.  It was a really great match.  Maybe not as great as some would of think.  It was a back-and-forth battle where both men land incredible moves.  Unfortunately, the crowd wasn’t as hot on this one wich was a shame.  The end saw Owens hitting Cesaro with a twisting neckbreaker off the top  and then his patented Pop-up Powerbomb to earn the win. 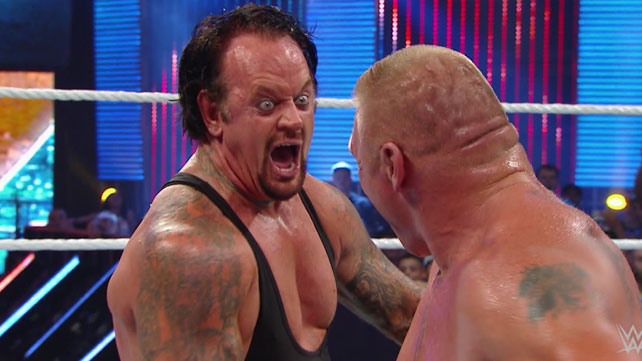 The main event was a big one where the Undertaker squares off against Brock Lesnar in a rematch of Wrestlemania XXX deemed “Too Big for Wrestlemania”.  Undertaker look to be in a good shape for this match.  Lesnar hit a F-5 trought the announce table wich got the crowd off their feet and of course a lot of suplexes.  Undertaker kickout of 2 others F-5 while Lesnard kickout of the Tombstone Piledriver.  We got a controversy finish.  Lesnar had Undertaker in the Kimura Lock when the bell rang without any signs by the referee.  While the ref argues with the time keeper, Undertaker low blow Lesnar and lock in Hell’s Gate.  Lesnar refuse to give up by giving Undertaker the finger but eventually passed out.  Taker wins by soumission.  Replays shows the Undertaker taping out to Lesnar wich was only saw by the time keeper not the ref.  Paul Heyman was really frustrated and declared that Brock was the winner.  But officially Undertaker wins that one.

Overall it was a good show.  Not going to said that great.  In my humble opinion there was to many tag match on the card.  The ending was bad. The crowd didn’t knew what happen. Match of the night for me goes to Cena vs Rollins(Seth being the MVP of the night).  NXT had  a better showing than Summerslam by far. Not the best Summerslam compares to the last couple of year but it was enjoyable.